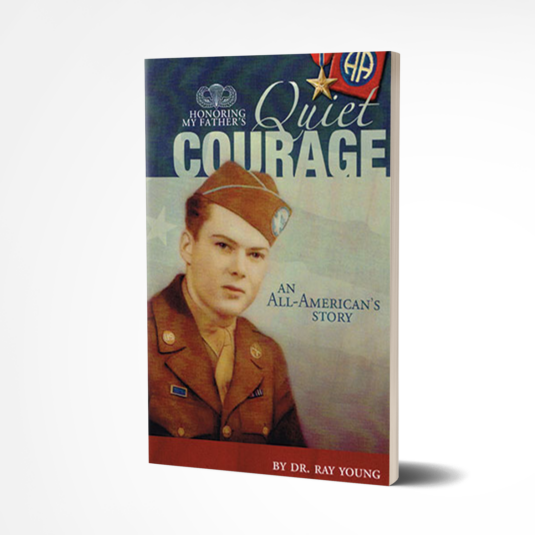 “My father was in the 82nd Airborne in World War II. He fought in the Battle of the Bulge, the crossing of the Ruhr River, the Ardennes Forest and other major campaigns. This book tells of his front line, hand to hand combat experience. It also relates many reasons my brothers and I learned from while growing up in his home. In fact, at the end of each chapter I list and summarize the lessons which can be learned from that chapter on hard work, character, and many other valuable lessons he taught us. It is not only an interesting book for teen boys and those interested in World War II, but it is also a very helpful book for parents as it explains many child-rearing skills, family relations, character building, work ethics, etc.”

“While fighting from building to building in yet another nameless town, a German lieutenant stepped around the corner of a building and into the street about the same time as Pvt. Young. They were several yards apart, but both young soldiers were in such good physical condition and had been so highly trained that they reacted without a moment’s hesitation. Of course, the lieutenant immediately raised his rifle to his shoulder to take aim and fire at Theo. Knowing he did not have time to shoulder and fire his rifle, Theo quickly grabbed the pistol grip handle of his collapsible stock carbine, which was hanging in a swivel holster on his right side. As he swung up the barrel of the carbine, still in its holster, he squeezed the trigger….”